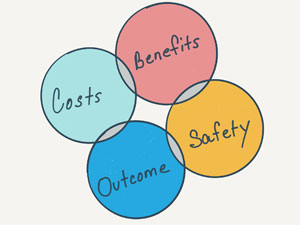 A clinical trial is defined as the controlled, clinical testing in human subjects of investigational new drugs, devices, treatments or diagnostics, or comparisons of approved drugs, devices, treatments or diagnostics, to assess their safety, efficacy, benefits, costs, adverse reactions, and/or outcomes. Such studies may be conducted under an industry-developed protocol (referred to as a "sponsor-initiated clinical trial") or an investigator-developed protocol (referred to as an "investigator-initiated clinical trial"). These studies are most often conducted in conjunction with obtaining new drug or device approval from the U.S. Food and Drug Administration (FDA), under an Investigational New Drug (IND) application or as IND exempt for drug studies (as *Phase I, II, III, or IV), or under an Investigational Device Exemption for device studies, although studies can be designed with the sole purpose of collecting and analyzing data about approved drugs or devices in order to contribute to medical knowledge about the treatment of a disease or medical conditions. In the case of a non-FDA regulated drug, device, treatment or diagnostic (including dietary supplements), the study must use medical facilities and University personnel in the performance of the study. In all cases, the study must include the prospective enrollment of human subjects and the controlled testing of a drug, device, treatment or diagnostic under an approved protocol.

To be eligible for using the University of California Office of the President (UCOP) approved Clinical Trial Indirect Cost Rate, financial support for a clinical trial must be provided by a for-profit, commercial entity, such as a pharmaceutical or device company. The above definition has no impact on the intellectual property policies applicable to various types of agreements, the allocation and distribution of private indirect cost recovery, applicability of various policies (including FDA regulations) about disclosure of conflict of interest, or other policies of the University.

* Phase I: the initial introduction of an investigational new drug into humans. They are typically closely monitored and may be conducted in patients or normal volunteer subjects. These studies are designed to  determine the metabolism and pharmacologic actions of the drug in humans, and the side effects associated with increasing doses, and, if possible, to gain early evidence on effectiveness. During Phase I, sufficient information about the drug's pharmacokinetic and pharmacological effects should be obtained to permit the design of well-controlled, scientifically valid, Phase II studies. The total number of subjects and patients included in Phase I studies varies with the drug, but is generally in the range of 20 to 80. Phase I studies also include studies of drug metabolism, structure-activity relationships, and mechanism of action in humans, as well as studies in which investigational drugs are used as research tools to explore biological phenomena or disease processes.

Phase II: controlled clinical studies conducted to evaluate the effectiveness of the drug for a particular indication or indications in patients with the disease or condition under study and to determine the common short-term side effects and risks associated with the drug. Phase II studies are typically well-controlled, closely monitored, and conducted in a relatively small number of patients, usually involving no more than several hundred subjects.

Phase III: expanded controlled and uncontrolled trials. They are performed after preliminary evidence suggesting effectiveness of the drug has been obtained, and are intended to gather the additional information about effectiveness and safety needed to evaluate the overall benefit-risk relationship of the drug and to provide an adequate basis for physician labeling. Phase III studies usually include from several hundred to several thousand subjects.

Phase IV: conducted following a drug's approval from the FDA for a particular use and explore unapproved uses, dosages and indications of the drug.