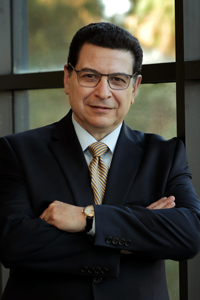 Rodolfo H. Torres is the Vice Chancellor for Research and Economic Development (VC-RED) and a Distinguished Professor of Mathematics at the University of California, Riverside (UCR).   As VC-RED he provides a broad vision and executive leadership for campus-wide research initiatives and is responsible for inspiring and managing a diverse portfolio of research and creative activity, as well as economic development activities in coordination with the region, state, and other external partners, via technology transfer, commercialization of intellectual property, entrepreneurship, and affiliations with established companies.

BIO
Before arriving at UCR in 2019, Torres was University Distinguished Professor of Mathematics, at the University of Kansas (KU) where he served for more than six years in the Office of Research, first as Associate Vice Chancellor and then as Interim Vice Chancellor for Research and President of the Kansas University Center for Research Inc. (KUCR). He is also a former Faculty Senate President at KU. Torres did his undergraduate studies at the Universidad Nacional de Rosario, Argentina, received his Ph.D. in Mathematics from Washington University in St. Louis, and held postdoctoral positions at the Courant Institute of Mathematical Sciences of New York University and the University of Michigan, Ann Arbor, before moving to KU.

Torres’ research interests include Fourier analysis and its applications in partial differential equations, signal analysis, and biology. He specializes in the study of singular integrals, function spaces, and decomposition techniques and is most recognized for his work with various collaborators on several foundational aspects of the multilinear Calderón-Zygmund theory. Torres has collaborated with biologists to explain structural coloration phenomena in the tissues of animals, a work that received considerable scientific media attention including articles in The New York Times, Science Magazine, and Discovery Channel on-line. In addition, he recently collaborated with an economist and computer scientists on the use of machine learning techniques to automatize an award classification process related to the Higher Education Research and Development Survey (HERD) collected annually by the National Science Foundation (NSF). Torres’ research has been supported by grants from the NSF and he has given numerous lectures and taught short courses around the world. He has also received several awards for his efforts with students, including a Kemper Foundation Excellence in Teaching Award. In 2013 Torres was elected to the inaugural class of Fellows of the American Mathematical Society (AMS), in 2017 he was featured in the Lathisms Calendar of Latinxs and Hispanics in Mathematical Sciences and the AMS, and in 2019 presented a Congressional Briefing invited by the AMS and the Mathematical Science Research Institute at Berkeley.