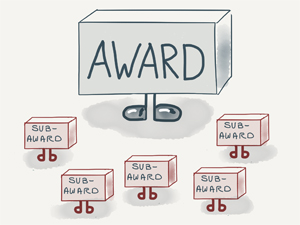 When conducting sponsored programs, investigators may desire to enter into an agreement with third parties to complete a portion of the scope of work. The third party, known as the subrecipient, will be required to provide the resources necessary to complete the portion of the scope of work as a semi-independent project; this includes providing a responsible investigator at the work site of the cooperating institution or company to oversee program activities.

UCR's proposal to the prime sponsor should include the intent to establish a subaward, however, some sponsors may allow investigators to add subawards after the prime award has been made. Please refer to the terms and conditions of your award to verify whether sponsor prior approval is required to transfer a portion of the scope of work to another entity.

Initiation and Negotiation of Subawards

Once the information and approval is received in RED, the Principal Sponsored Programs Officer will draft the subaward to include terms and conditions as required by the prime sponsor. The subrecipient may request clarification or negotiation of any terms, which are negotiated by RED. In turn, RED consults with the Principal Investigator regarding the negotiation of the scope of work and budget. Once a subaward has been executed by both parties, RED notifies the Principal Investigator, department administrator and Accounting Office via e-mail. The complete subaward document is made available through PAMIS.

Technical Monitoring - As the prime award recipient, UCR assumes the ultimate responsibility for the conduct and completion of the project. Subaward progress reports should be reviewed thoroughly by UCR's Principal Investigator and discussed with the subrecipient as needed. The subrecipient will be required to furnish reports as identified in the subaward. It is important to notify RED if technical progress reports fall behind schedule or are not provided.

Typical questions that should be asked as part of an effective subrecipient monitoring effort include the following:

Principal Investigators and/or department administrators should report any of the following to the RED as soon as possible:

Should it be necessary to change any portion of a subaward, the Principal Investigator should contact the Principal Sponsored Programs Officer. Common reasons for amending a subaward include providing additional funding, extending the period of performance, or modifying the reporting schedule. It is important to note that some changes, such as scope of work changes, change in the subrecipient's principal investigator or transferring the subaward from one recipient to another, may require the prior approval of the prime sponsor.

The subrecipient is required to submit a final technical report and final invoice at completion of the agreement. Additional reports may be necessary, as required by the prime sponsor agreement. These may include a final inventory of property or an invention report. Principal Investigators should not approve final payment until all reports have been received.

Principal Investigators, assisted by department administrators, are responsible for conducting timely and appropriate financial and programmatic reviews of the technical information and invoices submitted by subrecipients. The RED can assist with securing information and invoices from subrecipients who have failed to meet their obligations under their respective subawards. However, timely notification to the RED is essential to help ensure a successful and collegial resolution to such issues.

Subrecipient is a legal entity that receives Federal assistance via a subaward from UCR to carry out or administer a program, including responsibility for programmatic decision making.

Subaward is defined, for the purpose of this guidance, as the legal agreement between UCR and a subrecipient that transfers a substantive portion of the scope of work and federal financial assistance funding under an award received by UCR. A subaward does not involve the procurement of goods or non-research services.

Below are general guidelines for monitoring subrecipients. If there are specific concerns or questions please contact the Contract and Grant Officer assigned to your unit for more detailed advice.